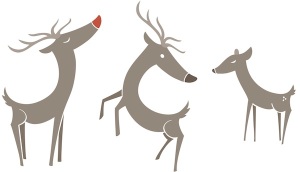 Do you dare tackle that most controversial of writing assignments, the holiday letter?

It’s a tricky task. The audience should be people distant enough that they don’t already know your news, but close enough that they won’t squint at the return address and ask “Who on earth are ‘Joe and Meredith Saberfogle’?”

I like getting holiday letters from old friends, and I like the challenge of writing them. Here are my (updated for 2016) tips for holiday letter writing.

OK, so holiday letters occupy a position just below fruitcake on the top ten list of Things to Dampen the Holiday Spirit.

This need not be so.

While fruitcakes are pretty much victims of their own cloying recipe of heavy and sweet ingredients, you have complete control over what goes in your holiday letter. Really, you do.

Each year we receive a few dozen holiday letters. Some have me yawning with boredom or rolling my eyes with incredulity by the second sentence. Others have moved me to tears, or had me eagerly reading them out loud to other family members.

Here are a few tips for creating letters that fall into the second group:

1. Write for your recipients, not for your family. If two of your kids made the dean’s list and one was in juvenile court three times last year, don’t feel you need to go into detail about any of it, or invent something for the black sheep to balance out the other kids’ accolades. “Janie is a junior at Oregon State, Pete is in his freshman year at Reed, and Susie is in her last year of high school. We look forward to having the whole family together for the holidays in on the Oregon Coast,” is just fine to keep old neighbors and college friends up-to-date. Many of them can’t remember the kids’ names, anyway.

2. Go short, stay focused. While you will probably start by drawing up a list of the key things that happened to your family during the year, select just two or three to highlight in the letter. Professional and scholastic achievements can be boring and off-putting. Travel and hobbies are almost always a better choice, as they give people not only news about what you’ve been doing but an insight into another region or field of interest. Something really outrageous is ideal — but only if the family member it happened to is OK with it appearing in the letter. “For some reason, Arabella insists on dyeing her hair in atrocious colors,” will amuse the reader, but not Arabella. (Thought it might inspire Arabella to start writing her own holiday letters — mentioning you…)

3. Make it clear who’s writing the letter — that being you. It’s difficult and a bit weird to refer to yourself in the third person, as if a reporter were profiling your family. And it’s even weirder to use “we” and then try to talk about things you did as individuals. Don’t go there. It really is OK for the writer to begin the letter “Elizabeth and I opened a new bookstore in July…” and at the end sign it “Frank and Elizabeth.” People will get it. (When I include stories from other family members describing their activities in first person, I set their words off from the body of the letter as indented paragraphs, in italics. For example:

[…] after our trip to Boston. Tom writes:

I broke away from the tour group and visited the original birthplace of Cthulu. Few people know it, but the Old One co-wrote with Lovecraft […]

4. Talk briefly about why you’re writing the letter. “It’s wonderful to take a few minutes to reflect about the year and share some highlights with friends,” is the type of opening you’re looking for. Don’t apologize. If you feel compelled to open with something like “We hate to bore you all with another long, stilted holiday missive,” you shouldn’t be writing one. Go make some eggnog.

5. Drop names. Not names of famous people, but names of mutual friends and acquaintances. This is even a good time to gossip, as long as you keep it positive. “We ran into Mark and Sandy Connors, our old neighbors from Denver, and discovered Mark left his job at Microsoft and is playing with a heavy metal group. Check out his new album…” This makes your letter a valuable source of genuine news, not just a brag sheet.

5. Keep your mailing list short. Send holiday letters to people you see once or twice a year (or less often) and with whom you genuinely like to keep in touch. Don’t send personal holidays letters to people who are (or were) purely business associates. As far as the people you see on a regular basis at the office or on Facebook? Spare them. They know this stuff anyway.

6. What about the people only one of you knows?  Our increasingly mobile society, our significant-otherships, our late marriages, and our re-marriages mean that quite a few people on your holiday list know one member of a family extremely well and the other members hardly at all. Think twice, maybe three times, before sending a letter to them. A personal note on a card might be better.

I’ll be the first to admit that while some of my holiday letters have been great, other years they have been merely pro forma. I can always use tips and inspiration. Please feel free to add your suggestions in the Comments!

This site uses Akismet to reduce spam. Learn how your comment data is processed.