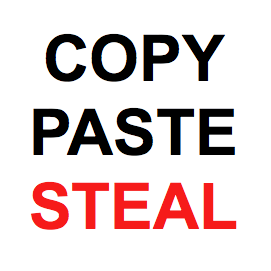 Last week I visited the website of a local business and was astonished to see that the keyworded webpage describing one of their services had the name of a rival business on it — in a big, bold subhead.

Curious, I went to the website of the rival, and there was the exact same content and photo.

The writer for the first business had simply copied and pasted the content (which appears to be original to the second business) onto the client’s site.

I sent email to the manager of Business #1, alerting her to the situation and explaining that the writer she’d paid to develop original content was instead using the content that Business #2 had paid their own writer, and a stock photography house, to provide. I noted that what her writer had done was plagiarism, and her writer had put them into a situation where they could be sued by the content owner.

The manager wrote back, expressing astonishment. She thanked me for letting her know, and said she’d deal with it.

Out of casual curiosity, I went back the following day to see if she had removed the page. My jaw dropped.

I called and spoke to the manager. She clearly thought that the error I was pointing out was that she had failed to remove the clue pointing back to the source of her stolen web content. I pressed the point, and her utterly unflappable response was that, hey, the content writer was a friend who had done the work for her for free.

Which shows that you really do get what you pay for.

Interestingly, Business #2 is an extremely competitive chain known for aggressive business practices. I predict it won’t take long for them to find the purloined web content.

I flirted with the idea that the writer who left the name of Business #2 in the stolen copy was making a stab at doing “black hat” SEO*, but decided not to attribute malice (or competence) to what’s clearly several layers of small-time thievery and laziness.

*”Black hat SEO” is the industry term for unethical search engine optimization. One of its milder (“gray hat”) tactics involves mentioning your rival’s name on your webpage so that search engines will lead people looking for your rival’s services to your page, where you can talk them into using your services  instead.

0 comments on “Is your web writer stealing content? Are you encouraging plagiarism?”

This site uses Akismet to reduce spam. Learn how your comment data is processed.